Like me, your mobile phone is probably alight with social media alerts for much of the day. The latest from our friends on Facebook and those vital updates on all things important on Twitter have become an essential part of our lives.

For those in business,  the new worlds of how to get your message out there have become all-important. You can’t post anything on Facebook, it seems, without urgent pleas to “Boost this post to reach 230 more followers” and such advertising is extremely cheap compared to its mainstream rivals in newspapers, radio and regional television.

All of this, with the need to publish all their news online, has led to falling circulation and lots of grief at local newspapers in particular, and as someone who started their career as a local newspaper journalist, I have witnessed perennial consolidation in the regional media, cutbacks and job losses – twas ever thus.

But the media at all levels have survived and are adapting, and that goes for the regional and local media too. My local newspaper, the Leighton Buzzard Observer, has been around since 1861 and is still going strong every Tuesday.

Before you rush to boost your latest story on Facebook, consider the power of the local media to reach people. Liking a post on Facebook is a lonely thing, whereas every printed copy of a newspaper will be read by several people, especially if it ends up in a dentist or doctor’s waiting room. And a well-researched news story is much more persuasive and credible than any paid-for ad.

I advised my latest client, a local pub/restaurant, that a good local story with a news angle would be likely to find favour in the local media and was pleased to see the newspaper respond with an online piece and a page lead in the community section of the printed edition. 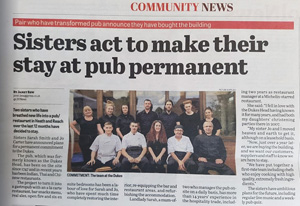 Such a story is likely to reach virtually everyone in the small village of Heath and Reach, where the pub has been around for several hundred years and is quite literally the community centrepoint, just across from the village green.

Keeping the local media informed with what you are doing works two ways and can be a win-win situation  – you are telling them something they may not know, and which may be a help to newsdesks who are having to keep track of communities often with dwindling numbers of staff.

But don’t get cocky – send a reporter trivial, unusable stuff will quickly mean your communications end up in the bin. Make sure the piece is relevant , with a news angle and hopefully a positive line that will have some interest for your local community. Make sure your story is supported by an image with as many faces as possible, they still sell newspapers.

The old adage about tomorrow’s fish and chip paper no longer applies -when Facebook has inevitably moved onwards to the next story, my pub’s news clipping will probably still be seen framed on the wall.

Thanks to Sara Smith of the Dukes, Heath and Reach, pictured with her team, and the editorial team at the Leighton Buzzard Observer.